Kenya's birds stand a record 1010 recorded species scattered all around the varied habitats ranging from the coastal shoreline,the vast semi-arid plains inland,rivers,inland lakes,forests,grasslands and mountains and having the advantage of almost a 12 hrs sunlight makes Kenya birding unique compared to other destinations. 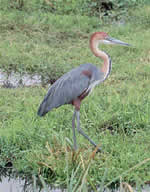 Birding Tourism is now getting popular and the industry has put all measures such as identifying and packaging all birding sites as a product in the mainstream tour circuits including providing training to professional bird guides.

We can tailor make your birding safari as per your preferred itinerary.

The parks exceptional bird life records a remarkable 400 species, their numbers swell between march-may when a host of European bird migrants make the park their home. look out for the marabou storks, vultures and hawk Eagles perished high in the acacia trees and on the grasslands for secretary Birds, Kori Buster, Ostrich, Crowned crane and the gorgeous Jackson's widow bird. For bird lover's, there is so much more than can be mentioned herein.

As far as birds conservation is concerned Kakamega reseve is one of the important birds area (IBA) in Kenya with a prolific record of over 330 species.

Other birds to be found only in this and nearby forests in Western Kenya include Black-billied turaco, Red -bellied paradise flycatcher, Chestnut, Jameso's and yellow-bellied wattle-eye, Southern Hyliota, Africa shrike flycatcher, white-tailed Ant-thrush, Petit's cuckoo-shrike and cassin's honeyguide.

Meru's bird are abundant and colourful; Common river birds include Ibis, Heron and African Fish Eagle while the riverine acacia woodland shelters, the smallest of the long tailed in birds, the Black-bellied sunbird. Flocks of glorous golden breasted starlings are also often encountered as well as loudly honking groups of hornbills.

Over 115 species have been recorded. ndere Island the papyrus swamps around lake victoria contain a unique selection of water birds.