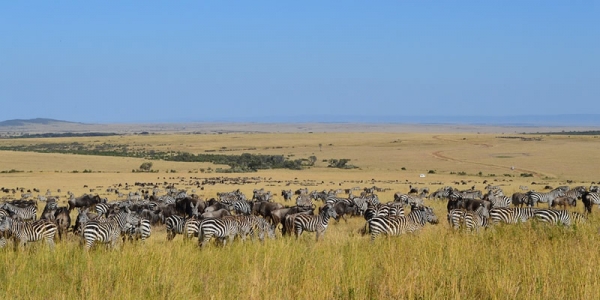 The Masai Mara National Reserve is Kenya's premier wildlife park.  The Masai Mara is the reason many visitors come to Kenya and its beauty and abundant wildlife won't disappoint.

The reserve is situated in the Rift Valley with Tanzania's Serengeti Plains running along its southern end. The Mara River runs through the reserve (north to south) hosting plenty of hippos and crocodiles and making the annual migration of over a million wildebeest and hundreds of thousands of zebras an extremely dangerous undertaking. Most of the Masai Mara is made up of hilly grassland which is fed by plentiful rain, especially during the wet months between November and June.

Masai Mara's Wildlife
The Masai Mara reserve is Kenya's most popular game park because it hosts an amazing concentration of wildlife. You are almost guaranteed to see the Big 5. Lions abound throughout the park as do leopards, cheetah, hyenas, giraffe, impala, wildebeest, topi, baboons, warthogs, buffalo, zebra, elephants, and of course hippos and crocodiles in the Mara River.The best time to go is between July and October when the wildebeest and zebra are at their highest number and offer plenty of food for lions, cheetahs, and leopards.

The best time to view animals is either at dawn or dusk.

Things to Do in and around the Masai Mara Reserve