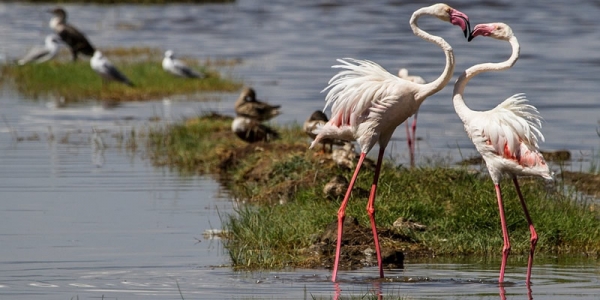 Lake Nakuru is among Kenya's finest National Parks and is a 2 hours drive from the Capital City of Nairobi. The surface of the Lake Nakuru occupies about a third of the park.

It supports a dense bloom of the blue-green Cyanophyte Spirulina platensis from which it derives its colour and is a food source for flamingos. It also has rocky escarpments, pockets of forest and at least one waterfall is year-round. During peak season over millions of flamingos and Pelicans congregate on the lake. The park is also residence to both black and white rhinos,  hordes of baboons, hippos, and leopards. There are also about 50 rare tree-climbing lions in the park, spotted several times per week. The usual zebras, buffaloes and Rothschild's giraffes seal the deal.

The forested area below Flamingo Hill is a favourite lion-spotting point. It's here that you should look up, not down as you are used to in other parks – lionesses love to sleep in these trees. Leopards frequent the same area, and are also seen around Makolia camp.

The caves beneath Lion Hill in the park's northeast once served as a defacto lion cub nursery. These days, they are more commonly frequented by snakes. Pythons lurk in the cool, forested areas early in the mornings.